Bericht: Peter Klein: Capitalism, Cronyism, and the Myth of the Entrepreneurial State

Capitalism, Cronyism, and the
Myth of the Entrepreneurial State 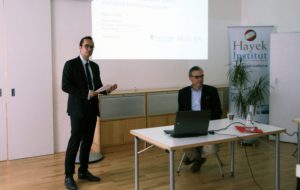 The issue of entrepreneurship is of relevant importance in current discussions. This is one of the most popular programs in colleges and universities, entrepreneurship courses are emerging, the activities have increased not only in business schools but in the entire curriculum, there are more doctoral programs and entrepreneurship journals have risen in impact factor ratings.

The W. W. Caruth Endowed Chair, Professor of Entrepreneurship, and Chair of the Department of Entrepreneurship and Corporate Innovation at Baylor University’s Hankamer School of Business, Peter Klein joined a live lecture at the Hayek Institut about the “Capitalism, Cronyism, and the Myth of the Entrepreneurial State”. The event was moderated by Scott Nelson. 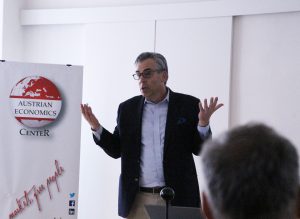 The significant growth in entrepreneurship is large since technological changes play a fundamental role today and that individuals have constant expectations that technology will be better. Since the Industrial Revolution, living conditions and wealth around the world have improved significantly, but there is a widespread idea that innovation results from the state and not from agents.

Klein stressed that we are experiencing a renaissance of the concept of the entrepreneurial state since bureaucrats play a role in science, entrepreneurship, and innovation. The interventionist programs that defend this concept do so on the ideas that basic science is a public benefit and on some technological inventions of the States.

But invention does not mean the same as technological innovation. The appearance of an invention does not mean anything if it does not add value to society. Thence the impulses of governments to research do not have a real impact on the lives of individuals. They are dedicated to granting benefits to some researchers that only increase their wealth. 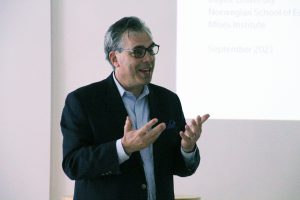 He emphasized the idea of an encouraging scenario also. The world begins to recognize the contributions of Austrian scholars on the question of entrepreneurship. The Austrian tradition contains complementary and diverse elements to advance research on entrepreneurship through distributed and tacit knowledge, entrepreneurial discovery, and the Austrian theory of capital.

That is the reason for entrepreneurship must be integrated into the theories of the company and the market, the theory of business strategy, and the theory of policymaking. Klein called for academics to return the entrepreneur to his proper place, as the market engine, and to focus on economic agents as allocators of capital, innovators, and executors of strategies.