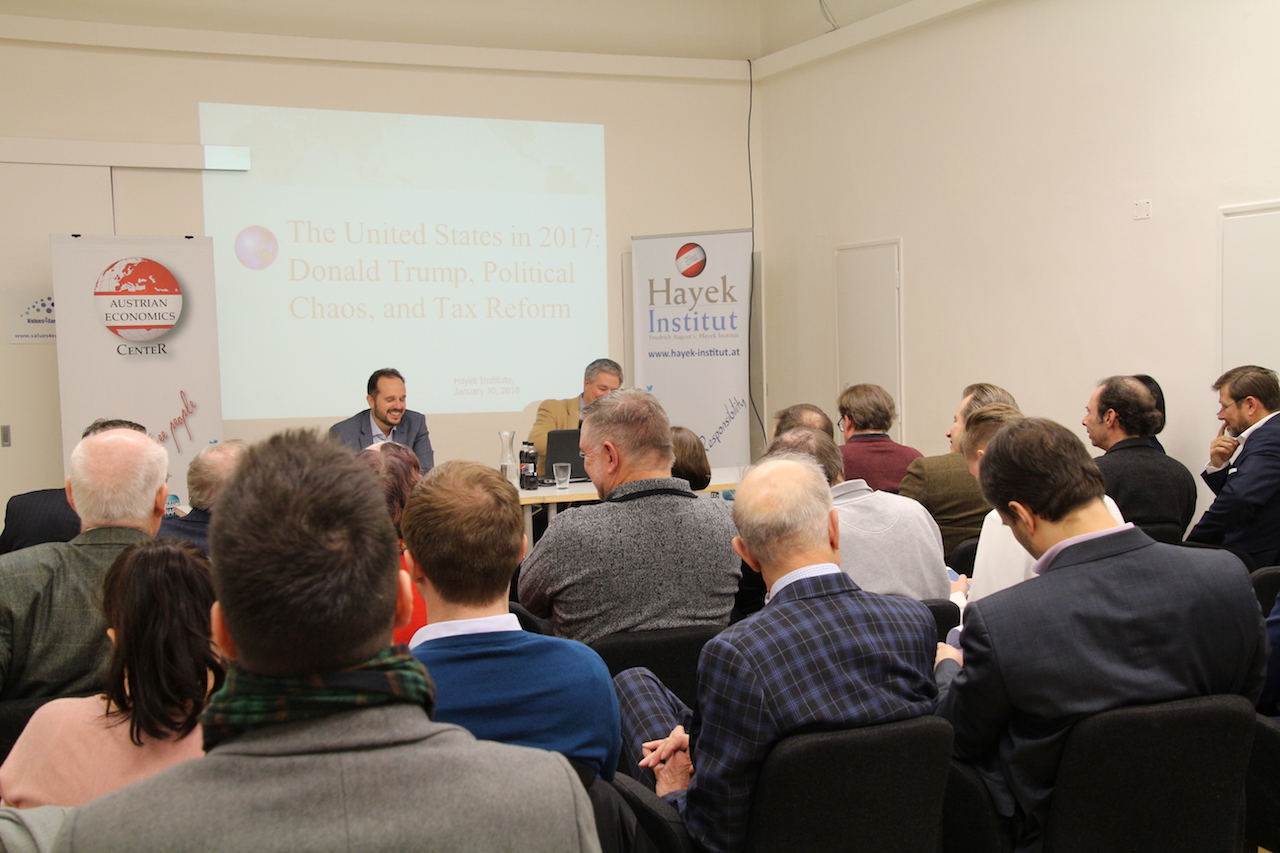 On January 30, 2018, the Hayek Institute and Austrian Economics Center invited economist and tax specialist Daniel J. Mitchell to speak on the topic of President Trump and the new tax reform bill.

Dr. Mitchell obtained his PhD from George Mason University, in Washington, DC, and co-founded the Center for Freedom and Prosperity, which specializes in promoting international tax competition. After serving as an economist for the Senate Finance Committee, he joined first the Heritage Foundation and then the Cato Institute as a Senior Fellow specializing in tax issues.

Dr. Mitchell opened his lecture by first expressing concerns that President Trump is not an ally to free markets due to his interest in protectionist policies and rhetoric. The additional concern is that the President’s desire for an “economic wall,” if implemented, would damage the country through destroying the very jobs the tax plan seeks to bring back and lowering the standard of life.

Having laid the international contextual foundation, Dr. Mitchell spoke of the domestic circumstances specifically. He explained that “Trump is a big spender,” with little interest in shrinking the size of the public sector. The size of government has not been reduced, and the President promised on the campaign trail not to cut traditional entitlements, which makes it unlikely that he will control future spending.

But there’s good news on taxes. Dr. Mitchell added that the old tax system penalized saving and investing while favoring consuming. He explained that this particular trait is not President Trump’s fault, as it predates him many decades, and it is instead predicated on a cultural bias against the rich and capital growth which politicians have successfully exploited.

The immediate domestic benefit to the tax plan, Dr. Mitchell said, is that it lowers corporate taxes, which will also have international repercussions as other nations will attempt to match the US in order to remain competitive.

Dr. Mitchell explained that the the Trump tax plan isn’t a long-run tax cut and he identified three specific revenue-raising provisions in the bill: 1) modified definition of inflation, 2) cap on state and local income tax deductions, and 3) curtailment of interest deductions for businesses.  The controversy about the first is that some say it is a stealth tax, allowing the government to tax people without regard for the increased cost of living. The second means a burden for those in high-cost states but it could have the benefit of resulting in lower state taxes, which are already too high. The third is bad in that it might hamper business investment but it might be good in that it reduces the bias for debt over equity.

In total, according to Dr. Mitchell, the plan will result in a “subtle increase in taxes,” rather than in any meaningful reductions; it is a short term plan that has already generated positive results, but it is unsustainable unless Republicans get serious about restraining spending.

In closing, Dr. Mitchell, reiterated that the primary beneficiaries of the tax bill are large companies and the international community as the plan should initiate the “virtuous cycle of international competition,” with other countries lowering their own taxes to compete.