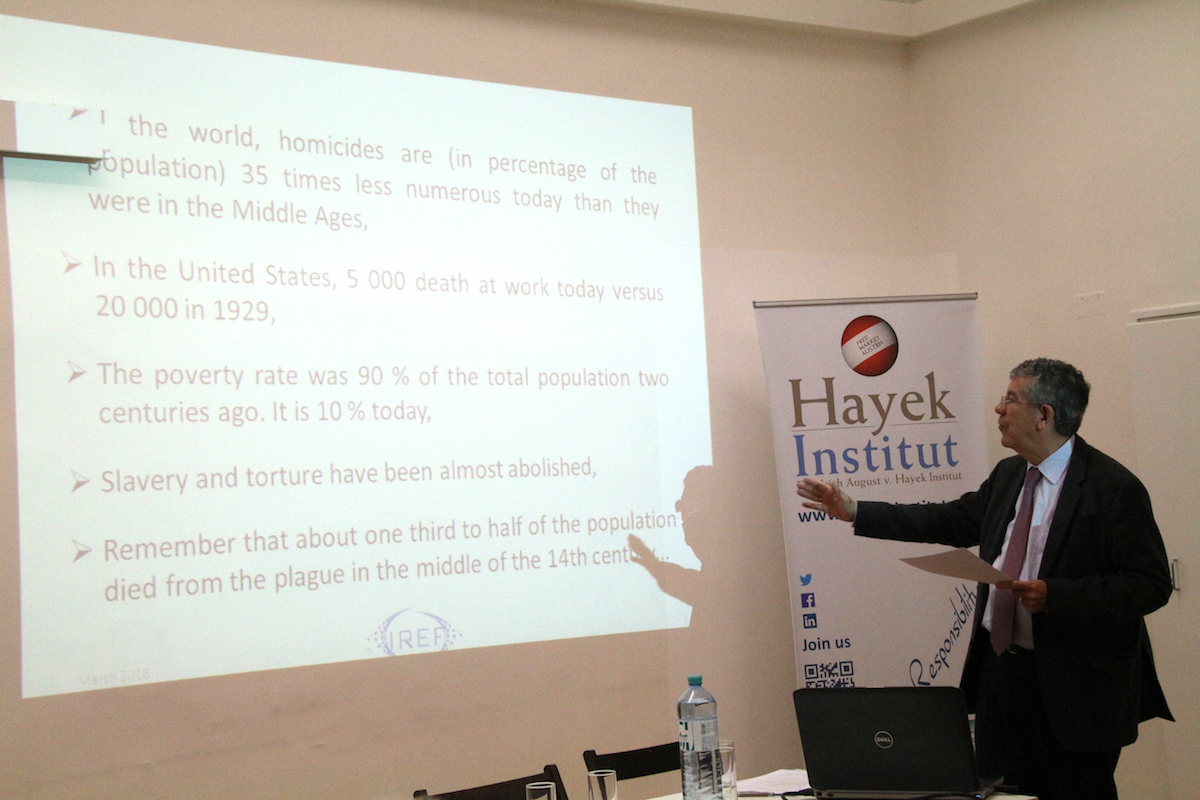 On March 8, 2018, the Austrian Economics Center and the Hayek Institut hosted the Institute de Recherche Economique et Fiscale (IREF) for their annual conference. The conference brought together a wide range of scholars who spoke on issues relating to free societies, market economies, and regulation.

The first panel dealt with welfare and its social effects, especially on culture. The overarching theme was that welfare has the potential to corrupt societies. The first paper, by Roland Fritz, established a mathematical correlation between welfare and a degradation of proactive mental models. Of particular note due to its implications for free societies was the hypothesis presented in the second paper that inhabitants of massive welfare states view restrictive business regulations favorably since their social context informs them that these are signs of egalitarian control. The second paper, presented by Alexander Fink, examined the use of language by economists and their alienating effect on non-economists who may lack sufficient context to understand the nuances of vocabulary.

On the second panel, two scholars presented papers on concrete examples of consequences of government intervention. Rosella Levaggi spoke about the problems posed in the Italian healthcare industry by federal regulation, and Aristides Hatzis used the history of Greece from the end of World War II to the present to illustrate the damage wrought by a slow increase in welfare dependency.

The third panel examined the effects of different national policies in varying contexts. Rosella Levaggi presented another paper, this one on the success of private-public partnerships in determining best locations for waste-to-energy conversion plants. Jaroslaw Kantorowicz spoke of his study on the relationship between constituency types, electoral systems, and federal fiscal behavior.

As the closing event, there was a roundtable that dealt with the issues of change and social security, or lack thereof. Christa Schweng addressed the challenges facing a social security system that was designed in a time when the average life expectancy was sixty-five and has not been updated since. Jean-Philippe Delsol returned to the theme of welfare and its corruptive effects and spoke on the strangling effect regulation has on innovation and genuine social improvement. Finally, Enrico Colombatto discussed the future of quantitative easing and the penchant of populist political parties for making promises that must necessitate deficit spending, even while also attempting to implement positive policies, such as flat-rate taxes. This final presentation addressed the overarching concern of the conference which was solving a situation where the people have become dissatisfied and disillusioned with the status quo but, due to decades of welfare dependency, have become infantilized and passive.