The Trump White House: The Good, the Bad and the Strange 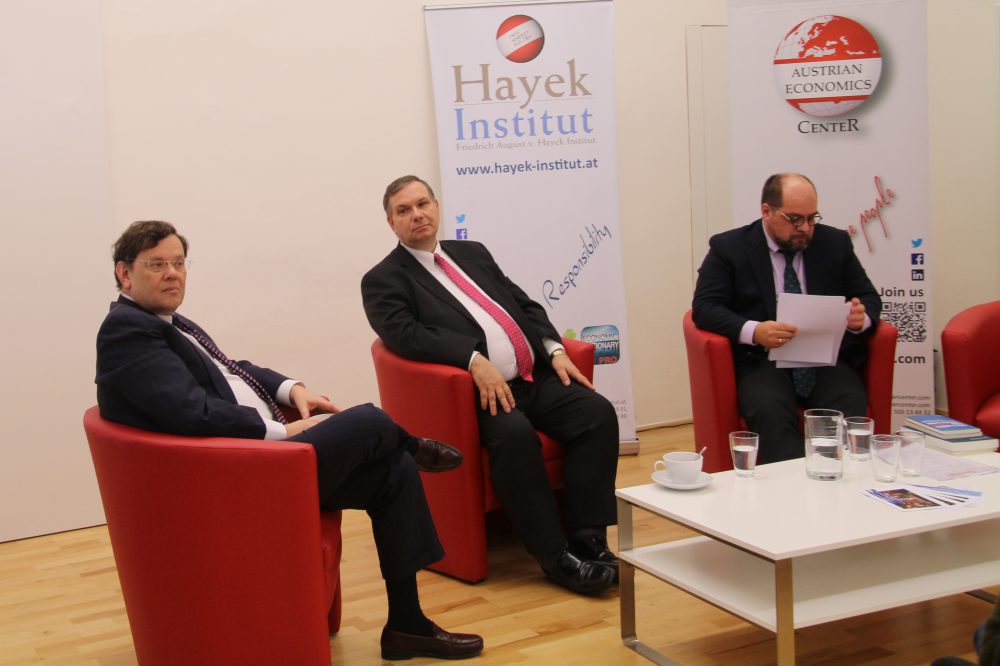 To offer an American perspective, the Hayek Institute invited the distinguished journalists John Fund, Henry Olsen and Alvino Mario Fantini to present their opinions on the Trump Presidential administration a year after the elections.

National Affairs columnist and an on-air analyst at Fox News, John Fund, has observed Donald Trump’s career during the past three decades.
Henry Olsen is Senior Fellow at the Public Policy Center. He is writing for UNHERD.com, a new British website, and is the author of a pioneering book on Ronald Reagan’s approach to blue collar workers.
Alvino Mario Fantini is editor-in-chief of The European Conservative and had served previously at The European Wall Street Journal. His perspective combines the American and the European approach.

Starting the discussion on the reasons why he eventually voted for Trump, Mario Fantini described Trump’s victory as a “blow to the solar-plexus” of the conventional political elite. A political elite under which, since the end of World War II, state and bureaucracy continued to grow, regardless of the commander-in-chief being Republican or Democrat. The group went on describing the achievements of the Trump administration, while emphasizing that, considering the Republican majority in congress and senate, those achievements should have been expected. Concerning the Trump administration’s policies, the journalists pointed out that especially a fundamental tax reform could be an opportunity for substantial progress and economic prosperity.

After further discussing the reasons, dynamics and chances of the Trump presidency, the experts opened the debate for questions from the audience. Here the conversation focused among other things, on the expected changes in the American foreign policy under their new president and Europe’s opportunities concerning this change. The session closed on an anecdote by John Fund about Hillary Clinton, describing one of the reasons why, despite of Trump’s controversial personality, so many people still chose him over the self-proclaimed female role model Clinton.

Find excerpts from the discussion here as video.