Book Presentation: The Indispensability of Freedom

The Indispensability of Freedom 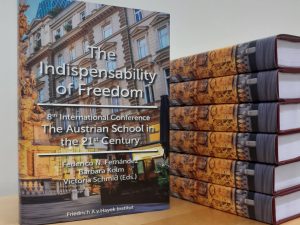 It is with great pleasure that we present this volume, which edits most of the papers presented at the 8th International Conference “The Austrian School of Economics in the 21st Century.” The event was held at the Oesterreichische Nationalbank (OeNB) on November 13th and 14th, 2019. It was co-organized by Fundación Internacional Bases, the Austrian Economics Center (AEC), and the Hayek Institut.

Purchase your copy in our webshop. 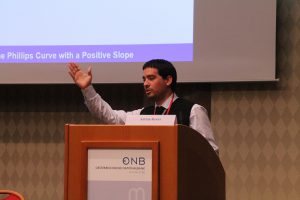 5:10 PM “Five Stages in the History of the Austrian School of Economics” by Adrián Ravier (Argentina)

5:40 PM “Liberty: Of Language and Responsibility” by Georgiana Constantin-Parke (Romania) 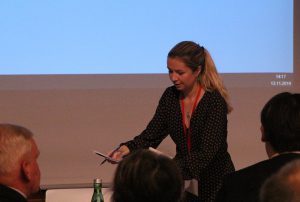 Georgiana Constantin-Parke has a Ph.D. in Political Science from the University of Bucharest, Romania; she studied European and International Law at the Nicolae Titulescu University in Bucharest and writes for several international online publications. She also teaches online for  Liberty University’s Helms School of Government (Virginia, USA).

Adrián Ravier is an economist, specialized in monetary theory, the study of economic cyclesand the history of economic thought. He has a PhD in Applied Economics from Universidad ReyJuan Carlos de Madrid (2009), under the direction of professor Jesús Huerta de Soto. Currently,he teaches at the School of Economics, Law and Agronomy in Universidad Nacional de LaPampa (UNLPAM, Argentina); in the graduate program and the Master in Economics atUniversidad Francisco Marroquín and OMMA; in the MBA at the Edinburgh Business School(EBS); in the Master and PhD in Economics at the Swiss Management Center University(SMCU) and for the PhD in Business Administration at Escuela Superior de Economía y Administración de Empresas (ESEADE).

Federico N. Fernández is President of Fundación Internacional Bases (Rosario, Argentina) and a Senior Fellow with the Austrian Economics Center (Vienna, Austria). He is also the president of the Organizing Committee of the International Conference “The Austrian School of Economics in the 21st Century,” which has taken place every two years since 2006 in Rosario (Argentina). He has been actively engaged in work within the Liberty movement for more than a decade.